What is Wavelength Division Multiplexing (WDM)?

View DWDM Solutions from Sorrento Networks
In practical terms, the prisms are replaced by specially created filters that combine and separate the individual connections coming from different fibre communication devices. WDM also enables individual connections to be routed to different places using a device called an optical add-and-drop multiplexer which enables only some wavelengths within the fibre to be accessed at each location. 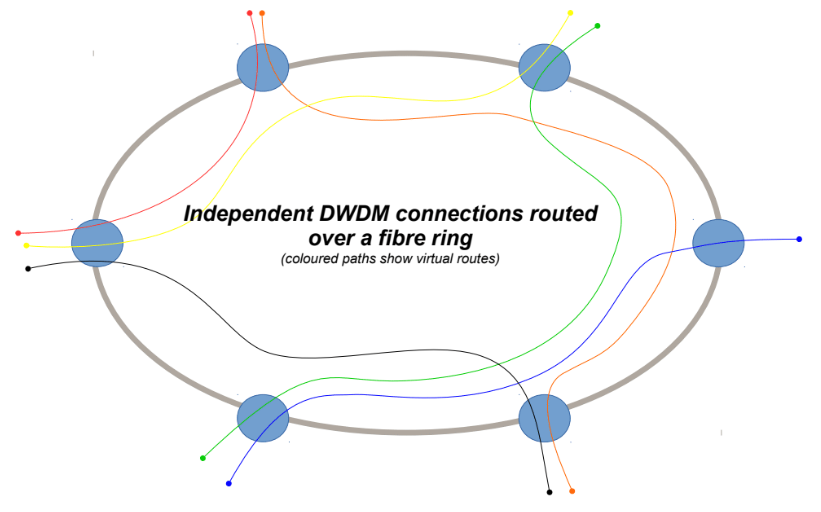 Each individual WDM channel behaves like a separate independent fibre and can carry either small bandwidths of a few kb/s or enormous bandwidths of 10Gb/s or 100Gb/s.

WDM connections can stretch into long distances of hundreds and even thousands of kilometres. This is because wavelength sensitive splitting multiplexing devices do not (as in GPON) waste power by sending it down the wrong path. Further, WDM channels may be amplified if distances require to distances of typically 80-250km per hop.

There are two main types of WDM – CWDM or Coarse WDM, where there are usually 8 channels available and DWDM or Dense WDM, where 40 or more channels are available although this distinction is less valid recently due to the falling cost of the devices used, making CWDM less cost-efficient of the two.

In their elementary form, WDM devices are passive. This simply means there are no electronic parts used, which also means there are also no electrical power or cooling. Feature rich DWDM systems include demarcation devices, wavelength conversion, service monitoring, sub-wavelength multiplexing devices and amplifiers.